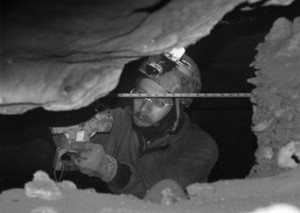 “Your measuring tapes are used by many cavers as the number one measuring tool for underground survey of caves. We have taken these tapes well over 500ft underground and have dragged them through some of the worst mud, grit, and grime you can imagine. We have gone to the point of completely covering the tape with mud – so much mud you cannot even see the numbers. We just washed the tape in water and it’s like new again. Nowhere above ground are you ever going to encounter conditions like what we put these tapes through. You get what you pay for and Keson tapes are just that indestructible!”

Based in Sewanee, TN, the Sewanee Mountain Grotto (http://www.caves.org/grotto/sewaneemountaingrotto/) is an organization with more than 50 volunteers that are dedicated to exploring, surveying and conserving the 14,000+ caves and watersheds located throughout Tennessee, Alabama and Georgia (TAG region).

North American caves provide shelter and home to thousands of creatures, in addition to pure, scenic beauty as daily tourist attractions. But cave visitors do not always clean up after themselves.

Known as cavers, the volunteers of Sewanee Mountain Grotto help keep caves clean while also enjoying the opportunity to explore and survey caves throughout the TAG region. This work, which contributes to the conservation and scientific study of cave environments, involves hours of careful measuring in conditions that are often challenging to the cavers and their equipment.

The equipment these cavers use must be rugged and able to stand up to extreme weather conditions, from regular submersion in water to extreme cold and abuse, including occasional drops from several hundred feet.

The Sewanee Mountain Grotto was first organized in the 1960s, and has been using Keson fiberglass tape lines as part of its standard surveyor’s toolkit ever since.

“We usually send in a team of three-to-four people on a surveying project, and we always carry a Keson 100-ft fiberglass tape (https://www.keson.com/products/Measuring/Long-Tapes.aspx) a compass and a chronometer with us,” said Jason Hardy, president, Sewanee Mountain Grotto.

Some caves feature free falls of more than 200-feet, yet the Keson long tapes do not let the Sewanee Mountain Grotto down.

“We like the 100-ft line the best, but we’ve used the 200 and 300-ft lines before for some of the larger free falls,” said Hardy, who is also a cartography expert for the SMG. “When we draw the cave, these fiberglass tape lines hold up better than other tapes we’ve used. They are rugged!”

With 50 active members, the SMG also works with the Sera Karst Task Force to gather information about caves that is then used by the NSS, by state environmental conservation boards and by the US Fish & Wildlife Service (USFWS) as they work to eradicate the white nose syndrome that is currently decimating bat populations throughout North America.

“Some guys also like carrying the laser distance meters, but even then they still carry a Keson tape, compass and chronometer,” Hardy continued. “The laser distance meters are fine, but they run on batteries, they can’t be used under water, and they don’t like to be dropped. We put the tapes through a lot of work; they are submerged in water, sometimes pushed through 3-inch crawl spaces, and yet they are accurate and easy to read in dark caves.”

“We try to teach people how to survey, and Keson tapes are the first things they learn with,” said Hardy.