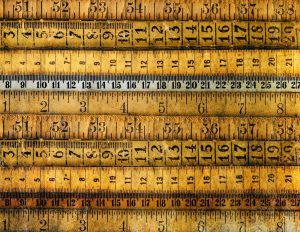 Since the beginning of time, measurements have played a major role in history. They served as a valuable frame of reference that enabled ancient civilizations to build, trade and create. We still carry many of these basic measurement principles with us today and use them in the modern world.

The first measuring tools were actually based around the human body, which is how some of today’s measurement standards got their name. An inch was considered the width of a thumb, a foot was just that—the length of a foot—and a yard was the length of a man’s belt.

Often considered the first unit of measurement, the cubit was developed by the ancient Egyptians and was the length of the arm from the elbow to the tip of the middle finger (about 18 inches).

Luckily, we’ve come a long way from the days of using belts, thumbs and cubits for measurement, but it’s always nice to know more about the tools you use every day. Let’s take a look at some of the most popular measuring tools we use on job sites and see how they evolved into the modern tools we depend on today. 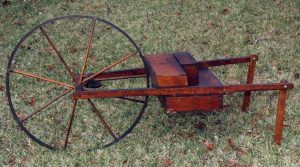 Example of a measuring wheel from the 1800s. –Source

You may know the measuring wheel by many different names – surveyor’s wheel, click wheel, hodometer, waywiser or trundle wheel. Regardless of what you call this trusty device, measuring wheels have been around for centuries, helping professionals measure distances easily and accurately.

Ideal for measuring long distances quickly, the measuring wheel has been around since the 1600s. The earliest surveyor’s wheels worked a lot like the odometers we use today, which isn’t surprising since the two instruments share the same origin that dates back to Ancient Greece. 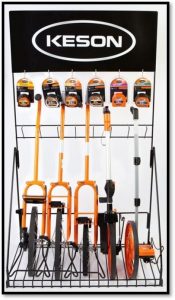 Although this valuable measuring tool has evolved in its design, it functions in much the same way it did hundreds of years ago. Today you will see measuring wheels used most often for construction, road marking and paving, fencing, surveying, traffic control and insurance purposes.

Wood Rulers – The Kings of Measurement 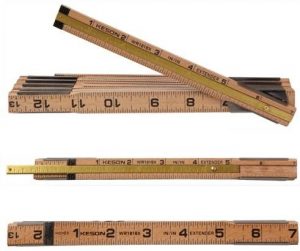 Some of the first rulers date all the way back to 2650 B.C. The ruler is a staple in any workshop, acting as a basic tool for measuring length, drawing lines and serving as a guide for cutting. Throughout the years, rulers have been created in many shapes and sizes, and have used a wide variety of materials from copper and ivory to the more traditional wood and metal.

One of the more popular rulers for carpenters is the folding rule, invented by Anton Ullrich in 1851. The folding rule consisted of smaller six-inch rulers that were joined together by pivoting hinges and could extend to a length of over six feet. It allowed tradespeople the ability to draw straight lines without the use of a chalk line or mason’s line and was a valuable, compact tool to have on hand at any job site.

While still considered a trusted tool among masons and old-school carpenters, the introduction of the more flexible and even more compact measuring tape has caused the folding rule to lose some of its appeal. 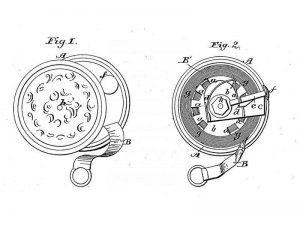 The steel measuring tape was a real game changer for many industries, offering a more flexible and compact tool that could measure great lengths. Alvin J. Fellows patented the first spring measuring tape in a circular case in the U.S. But he can’t take all the credit. He was just improving on an existing design that was created in 1821 in England by James Chesterman.

Chesterman was in the fashion business, creating metal hoops that lined the skirts of dresses that were popular at the time. When hoop skirts went out of style, James repurposed his surplus of metal tape by putting graduated marks on the tapes and marketing them to surveyors as a “Steel Band Measuring Chain” — a lightweight, compact alternative to their current instruments.

Alvin Fellows took Chesterman’s design and added a locking element to it that allowed the tape to lock when it was extended, thus creating the foundation for today’s retractable measuring tapes.

Measuring Up in Today’s World 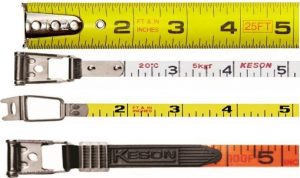 Most measuring tapes are made of either steel or fiberglass, which has become a popular option in the last 50 years. Roy Nosek, the founder of Keson tools, introduced the first fiberglass long tape measure to the US market in 1968. The unmatched durability of fiberglass gave these measuring tools the ability to withstand the toughest field conditions. 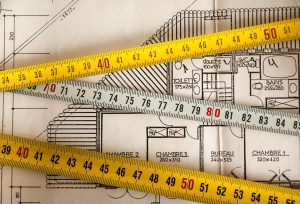 Although some of the most basic principles of measurement still hold value today, engineering and technology advancements have made current measuring tools far more accurate and durable.

Do you have a new measuring tool you can’t live without or perhaps an old trusted tool that never lets you down? Check out these Make Your Mark Stories and see what others are saying about their experiences with Keson tools.